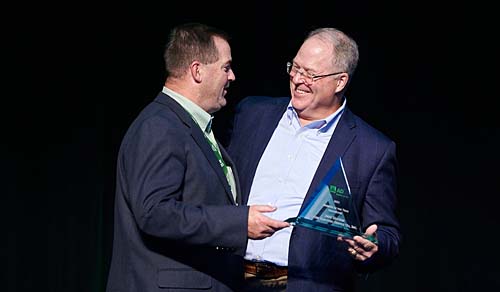 In a community that thrives on partnership and mutual success, the Spirit of Independence awards celebrate engagement and growth by fostering greater participation among members and suppliers. The awards also help AD members and suppliers learn more about each other’s successes.

“They survived World War I, the Great Depression, World War II, the economic crisis of 2007 and now a global pandemic,” Templin said. “Their resilience and strength are admirable.”

AD Supplier of the Year awards go to supplier partners who are highly engaged with and supportive of the AD community. These suppliers have increased purchases from members, offered powerful incentives, implemented progressive distributor policies, widely participated in AD programs and made strong use of sales and marketing activities.

The following companies received 2021 AD Supplier of the Year awards:

The Best Conversion to an AD Supplier award honors a member and supplier partner who joined forces to implement an effective conversion from a non-AD supplier to an AD supplier. The 2021 AD Conversion of the Year award winners are Locke Supply Co. and Siemens.

The Best AD Workplace Recognition award is presented to companies that achieve an overall engagement score of 85% or higher on a third-party engagement survey or are recognized regionally or nationally as a “best place to work.” The 2021 Best AD Workplace Recognition winners are Alen Eléctrica, Atkore, BRICOS, Klein Tools, Kirby Risk Corporation, Risoul and Schaedler Yesco.

One of very few awards given to an individual, the AD Member of the Year for Leadership award honors a person who has shown extraordinary initiative in helping to lead their division. This year’s award was presented to Jeff Hockin of Crum Electric Supply.

A member of AD since 1989, Hockin served on the divisional product committee and board as well as AD’s LLC board, where he was most recently lead director. Commenting on Hockin’s commitment to representing all AD members, Templin expressed gratitude for his contributions.

“It would be difficult to navigate our true north if we didn’t have the guidance and leadership from members like Jeff,” said Templin. “His selfless sacrifice has truly made AD and our independent distributor community better.”

Closing out the ceremony, AD’s Chairman and CEO, Bill Weisberg, presented the AD Giving Back award. This award is given to either an AD supplier or member that leads by example, making the health and success of their community a priority to their company and empowering their employees to contribute. This year, Kirby Risk Corporation received the AD Giving Back award in recognition of their role in establishing and sustaining a local Junior Achievement chapter.