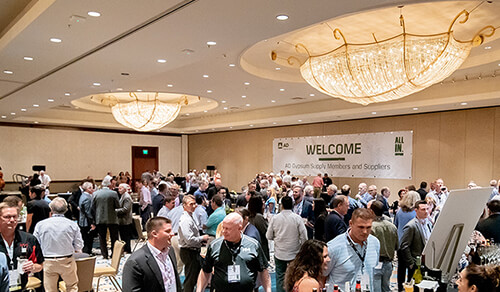 Wayne, Pa. – AD’s Gypsum Supply Division hosted its first combined meeting since its Building Materials Business Unit merged in April 2019 with The Drake Group, LLC. The fall meeting welcomed over 330 plus members and supplier partners in attendance. Held at the Hilton Austin hotel Sep. 19-20, attendees participated in a variety of events such as business meetings, receptions and member best-practice group sessions.

The Gypsum Supply meeting is among a host of gatherings for members and supplier partners throughout the year across AD’s 12 divisions in the U.S., Mexico and Canada, underscoring the importance AD places on networking, building relationships and recognizing excellence.

“We had overwhelming attendance,” Maroni said. “Our mission of the meeting was accomplished, one group focusing on strength and growth for the independents.”

AD Chairman and CEO Bill Weisberg delivered a business update and described what it means to be “All In,” this year’s meeting theme.

“It’s an absolute commitment to each other, it’s pushing the status quo, it’s getting fully involved and having an unwavering drive with customers, business partners and fellow associates,” he said. “AD is all in for our independents.”

According to Weisberg, about 240 new members have joined the AD community across its 12 divisions so far this year.

Weisberg took the opportunity to share key details on what’s tracking as a record-breaking AD year, illustrating just how “All In” AD is for its members and supplier partners. Highlights included:

Maroni addressed members and suppliers with a divisional update that included strategic initiatives and industry trends:

Motivational speaker Jim Craig, president and CEO of Gold Medal Strategies and 1980 Olympic hockey team goalie and gold medalist, inspired attendees by discussing his key learnings of teamwork in business and in sports. Craig left attendees with the understanding of his take on believing and executing a shared dream. “Much like this group forming as one”, he said, “never let your memories be bigger than your dreams.”

AD member-owner Brian Roll, George J. Roll & Sons, has a similar background to the keynote speaker of playing competitive Ice Hockey. Roll played Division 1 Hockey and was invited to play in the 1st National Sports Festival, the start of the 1980 Olympic Hockey Team Trials. Roll was invited by Herbie Brooks to try out for the next phase of the Olympic Hockey Team.

Ultimately, Roll decided to go home and run his family business. He continues to apply the lessons he learned of teamwork, the ability to adapt and commitment to assist him in the business world.

Roll shared his thoughts on the groups merging together. “Individuals have certain skill sets, but it’s teams that combine their skills to achieve greater success,” Roll said. “I find this much like us coming together today, Drake and AD, to battle against the much larger chains! I am thrilled to be here to show my support of this fantastic group now called AD Gypsum Supply!”

Attendees also heard about the relevant topic of cybersecurity risks and liability from experts who explained types of attacks, what to do in the event of an attack and how to protect businesses. Following the panel discussion, Keith Hughes with investment bank SunTrust Robinson Humphrey presented industry economic trends. The meeting concluded with non-competing member-facilitated groups sharing best practices and discussing problems and opportunities.