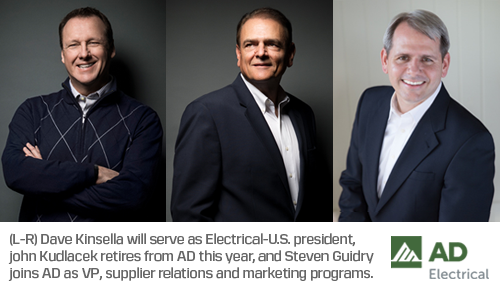 Wayne, Pa. – AD has named David Kinsella as president of its Electrical–U.S. Division with the unanimous backing of the Electrical-U.S. board. Dave currently serves as the division’s member relations vice president and will assume his new responsibilities as president effective Sep. 21.

In his new leadership role, Dave will be responsible for member and supplier partner engagement and growth for the division, collaborating with the AD team and other key stakeholders including the divisional board and AD member companies and supplier partners in the U.S. to deliver results and help members make the most out of their membership in the AD community.

Dave joined AD in 2008 as director of supplier relations and was promoted to VP of supplier relations two years later. In 2016, he became the division's VP of member relations. Dave’s experience in both member and supplier-facing roles, along with his passion for AD members, makes him uniquely qualified to lead the division into the future. Prior to joining AD, Dave served in a variety of leadership capacities in distribution and manufacturing including national sales manager at AD supplier partner Intermatic.

“Our Electrical-U.S. members are exceptional independent businesses who we’re very fortunate to work with,” Kinsella said. “It’s my honor to take on this new role and work with our members, associates and supplier partners to ensure our members stay ahead of the market.”

Electrical and Industrial Business Unit President Jack Templin pointed out Dave’s combination of past roles has equipped him to take the helm.

“Dave is a well-rounded, dedicated and passionate leader, Templin said. “His advocacy for members and his efforts to drive support of AD suppliers are both widely respected and have positioned him well to be the next leader of the division.”

President & CEO of ConneXion and Electrical–U.S. Division Board Chairman David Rosenstein said, “It’s very important to the member-owners of AD that our team is agile, innovative and committed to help our businesses and team thrive, especially in today’s changing world. Dave wholeheartedly exhibits all these qualities. I’m looking forward to working with him to leverage these talents to shape the future of the division and help members win in the market.”

Electrical-U.S. Supplier VP John Kudlacek has elected to retire as of the end of the year. During his tenure at AD, John worked to enhance a number of supplier relationships, and was a relentless advocate for the preferential support of AD suppliers, driving conversions and expanding marketing opportunities. John has also played an integral role in leading Electrical-U.S. product committee and supplier advisory council. He joined AD in 2016 after holding marketing and purchasing, operations and product management, and supplier relations roles at a national electric supply distributor.

“It’s been such a joy working with our manufacturers, members and the people at AD,” Kudlacek said. “I’m grateful that I got to work with such passionate people, and enjoyed a rewarding career making a difference in our members’ businesses.”

With this news, the group is announcing that Steven Guidry will become the Electrical-U.S. VP of supplier relations and marketing programs effective Sep. 21. Guidry brings a wealth of electrical industry experience from the distributor, manufacturer, and agency sides of the business. Guidry joins AD from Texas-based JD Martin Company, a manufacturers’ representative firm for many of AD’s electrical preferred supplier partners. His experience as an AD supplier and his unique perspective as a former AD member make him a valuable addition to the AD team.

“AD and its team have garnered an unparalleled reputation in the market, and it’s an absolute thrill to be invited to join them in their mission to help their members win,” Guidry stated. “I look forward to working with the division’s supplier partners to continue having a positive impact engaging with members to drive sales mix, new product sales, and increasing top-line growth.”

Templin added, “These new leaders join a passionate AD team, and I’m more confident than ever our members and supplier partners are set up for a rewarding future.”