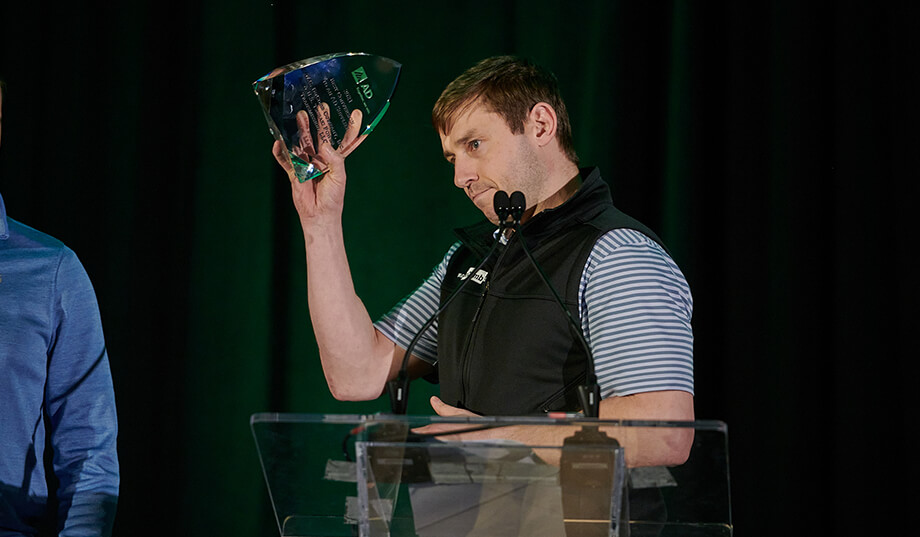 National Harbor, Md. – During its first in-person North American Meeting in two years, the AD Bearings & Power Transmission division held a special ceremony to celebrate the extraordinary achievements of its members and supplier partners. The Spirit of Independence Awards dinner, held on March 10, recognized individual BPT members and suppliers in the areas of sales and conversion performance, employee engagement and giving back.

In his opening remarks, AD BPT Division Vice President Darin Davenport noted the significance of the event in the wake of the pandemic.

“Our community of AD members and suppliers is truly best-in-class,” Davenport said. “While there will be individual winners recognized, this awards show celebrates the unique strength, resilience and comradery of our entire division.”

Davenport kicked off the awards ceremony with a special recognition of two board members whose terms are ending this year, Jim Scardina of Bearing Headquarters and Brad Fitzgerald of Binkelman. Both honorees have served on the division’s board of directors since 2015, helping to shape the strategy and programs that best serve the BPT community.

Scardina began his service in the BPT division from its inception, participating on the original Founders Committee and then transitioning onto the board as it was formed. He was also an active member of committees and advisory councils in the Power Transmission Distributors Association and Bearing Specialists Association (BSA), serving as the president of BSA in 2018.

Fitzgerald worked his way up from driver to general manager at Binkelman, developing a broad skill set and expertise across various roles. He served on the IDC-USA board for four years prior to the group’s merger with AD, and then served for three more years on the new AD BPT board formed in 2019.

AD Member Performance and Member of the Year awards recognize member companies who significantly grew their purchases from AD suppliers and participated in key AD programs and divisional initiatives. These members are seen as leaders among their peers in the division.

AD Supplier Performance and Supplier of the Year awards go to supplier partners who are highly engaged with and supportive of the AD community. These suppliers have increased purchases from members, offered powerful incentives, implemented progressive distributor policies, widely participated in AD programs and made strong use of sales and marketing activities.

The AD Marketplace Supplier of the Year award recognizes the supplier who meets the highest quality standards for their Marketplace store, including catalog presentation, payment terms and freight policies. This year’s award went to HKK Chain.

Closing out the ceremony, Jack Templin, president of the AD Electrical & Industrial Business Unit, presented the AD Giving Back award. This award is given to either an AD supplier or member that leads by example, making the health and success of their community a priority to their company and empowering their employees to contribute. This year’s recipient, Bearing Service, partnered with a local food bank and a rescue mission to support a growing number of food-insecure families in their community. Together, they raised donations totaling more than $100,000.