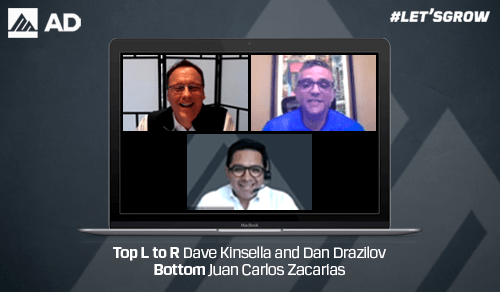 Wayne, Pa. – AD’s three electrical divisions hosted their first virtual North American meeting Sep. 29-Oct. 2, 2020, with record-breaking attendance of 1,339 participants from member and supplier companies across U.S., Canada and Mexico divisions. The North American meeting is one of seven AD meetings across multiple industries that shifted to virtual this fall, all designed to enable networking, keep members up to date on group and divisional performance, showcase programs and services available from AD, and foster relationship-building.

The virtual setting provided an opportunity for members and suppliers to welcome more of their associates to business meetings and booth meetings, and members still had the opportunity to meet with their network groups of non-competing market leaders from the industry. These sessions provided members with an opportunity to share ideas and develop sales and marketing strategies for the coming year.

Consistent with this year’s meeting theme, Let’s Grow, AD hosted 24 strategic webinars where supplier sponsors presented their plans for continued growth with AD members in 2021 and beyond. Participation, engagement and feedback from members were all extremely positive.

According to Jack Templin, president of AD’s Electrical & Industrial Business Unit and chief programs officer, the Let’s Grow theme represents the global challenges faced this year and the countless ways AD’s independent distributor members have innovated to thrive in this difficult environment.

“The AD community of members, supplier partners and associates has always been passionate about growth,” Templin said. “Our Let’s Grow theme represents the commitment our community is making to look ahead with renewed energy and charge forward to help independents win. It was really gratifying to see such a significant increase in attendees this year, a silver lining to be sure.”

President of the Electrical-U.S. Division Dave Kinsella emphasized that AD’s scale is due to the quality of the membership, comprised of resourceful, determined and passionate independent distributors across three nations.

“Our membership is filled with the brightest minds in the industry, “Kinsella said. “Some of the best and most progressive electrical distributors in the world are in the AD community. When we harness the power of the group, our future is boundaryless!”

Dan Drazilov, president of the Electrical-Canada Division, added, “Our collaboration with members, suppliers, and internally across all divisions provides AD with an abundance of creative ideas, best practices and invaluable feedback that helps us to provide the highest level of value.”

Electrical-Mexico Division Director Juan Carlos Zacarías offered his perspective on the partnership of members and suppliers. “Without a doubt, current times have been challenging, however the commitment and support of AD members have allowed us to have outstanding performance in the domestic market, confirming for our suppliers that in AD, they will find the most selected group of independent distributors, developing and sharing among them the best business strategies,” he said.

AD welcomed several members to speak at the country-specific member business meetings, each commenting on the importance of member ownership and participation in AD initiatives, and the power of AD’s community of members.

John Hanna, president and COO of Fromm Electric, who serves on the Electrical-U.S. board, commented, “Ownership has responsibilities. You get out what you put in. I personally know that AD is the best organization in the industry but we, as a group, can make it even better.”

Outgoing Electrical-Canada Board Chair Heather Gerrie Kwant, co-president of Gerrie Electric Wholesale Ltd., said, “I’m excited about AD’s future and I believe AD is best in class of marketing groups in the world! I’m inspired by (AD Chairman and CEO) Bill Weisberg’s vision and the fantastic dedicated team he surrounded himself with, as they are always exploring ways to find new business opportunities for us and always eager to support our companies.”

AD Electrical-Mexico Division board member Luis Carlos Garza Tamez, CEO of ABSA added, “I’m convinced that AD has the best team of distributors – forward-thinking and engaged enterprises that are looking for the most creative ways to get ahead.”