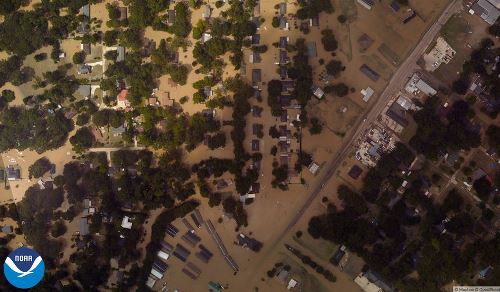 Louisiana Floods and The AD Community

The catastrophic flooding happening in Louisiana has become the worst natural disaster to devastate an area of the United States since 2012’s Hurricane Sandy. The flood waters unexpectedly swept through Louisiana towns, overpowering neighborhoods, causing damage to over 60,000 homes, and displacing more than 2,600 residents who are currently living in shelters.

As many of you know, the various divisions of AD include members that are located throughout the Louisiana region. We reached out to see how they were dealing with this disaster that struck quickly and ferociously, dumping close to 7 billion gallons of rain in one week.

Hal Langford, CEO of Shannon Hardware Co., and a member of the AD Industrial Division, informed us that even though his business had experienced some damage, no employees were hurt. He wanted to note that his employees went above and beyond helping others with high water rescue as well as removing damaged drywall and furniture from homes.

Quality Tool & Services, another member of AD Industrial, informed us that a few employees in Baton Rouge have lost vehicles, and one in particular has even been forced to rip out sheet rock to clean out debris throughout the last few days. A Go Fund Me account has been created by the company in order to raise money for their affected employees. To donate, please visit https://www.gofundme.com/2qjh8ydq.

Several members of AD Electrical have also been affected by the flooding in Louisiana. Teche Electric employees in the Baton Rouge area lost everything due to high levels of flood water. Many Teche employees were evacuated out of their homes and sent to shelters. After the storm, many returned to their homes to find devastating water damage, and have spent days cleaning up while they live with family and friends. Many employees did not have property or flood insurance.

Bayou Black Electric Supply and Dealers Electrical Supply thankfully noted that their areas were not as affected by the flooding. David Dozier from The Reynolds Co. informed us that the charitable arm of The Reynolds Company, R4 Foundation, has opened a donation page to any employees, vendors, and friends who wish to help those affected: http://r4foundation.org/donate-to-r4/.  Harold Singer, President of MG Automation and Controls, stated that even though they were not affected by the floods due to their location, “the destruction is massive and it’s unfortunate that hurricane season can do so much damage.”

Acoustical Specialties & Supply, Inc., a member of AD Building Materials, was another unfortunate casualty. Speaking with Steve DeLaune, president of the company, we learned that he and a majority of his employees have had major water damage impacting their homes, cars and possessions. A Go Fund Me account has been created for them. If you would like to donate please visit https://www.gofundme.com/AcousticalSpecial.

Southern Pipe & Supply, a member of the PVF & HVAC divisions, is relying on their “Family for Family Fund” to help the numerous Southern Pipe family members whose homes have flooded.  This fund was created 11 years ago in the aftermath of Hurricane Katrina.  In order to assist as many Southern Pipe family members as possible, they are asking their loyal vendors and friends to consider making a donation. If you would like to donate to the Family for Family Fund, please contact ron.black@southernpipe.com.

If you wish to help any of these companies, or any other members that may have been affected by this disaster, please contact AD immediately and we will help to coordinate efforts.