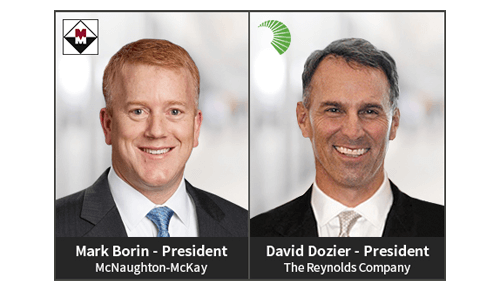 The company is pleased to announce Mark Borin as President of McNaughton-McKay Electric Company and David Dozier as President of The Reynolds Company. Borin and Dozier will assume full profit and loss responsibility for their respective business units. Dozier reports to Walt Reynolds, CEO of The Reynolds Company; and Borin, along with Walt Reynolds, report to Donald Slominski, CEO of McNaughton-McKay Electric Co.

Mark Borin is the former Executive Vice President and Chief Financial Officer of Pentair and was a member of the KPMG firm for 19 years where he served as an audit partner prior to his time at Pentair. Borin holds a bachelor’s degree in Accounting and Economics from the University of Michigan and is a Certified Public Accountant. During his 12-year career at Pentair, Borin was involved in their merger and acquisition activity, including the completion of many large and small acquisitions and divestitures. Borin officially joins McNaughton-McKay in June 2020.

David Dozier has been with The Reynolds Company for 24 years, starting as a Business Development Manager and progressing to his most recent role of Senior Vice President. He has been involved in many of the branch acquisitions and expansions, including all five branches in the Gulf Coast. Dozier has a bachelor’s degree from the University of Texas Austin and is a graduate of the Stagen Leadership Academy ILP training. He actively sits on the SupplyFORCE and AD ESD boards of directors.

About The Reynolds Company:
The Reynolds Company was founded in 1984 by Don Reynolds Sr., in Fort Worth, Texas. The company is a subsidiary of McNaughton-McKay Electric Company and along with Flow-Zone serves the industrial end user, industrial OEM and commercial construction markets with 25 locations in Texas, Louisiana and New Mexico. For more information visit: www.reynoldsonline.com.

About McNaughton-McKay Electric Company:
McNaughton-McKay Electric Company is a 100% employee-owned distributor of electrical products and solutions for the industrial automation, commercial and construction markets. The company was founded in 1910 in Detroit, Michigan and serves customers in 26 locations covering five states: Georgia, Michigan, Ohio, North Carolina and South Carolina, as well as two locations in Germany. For more information visit: www.mc-mc.com.