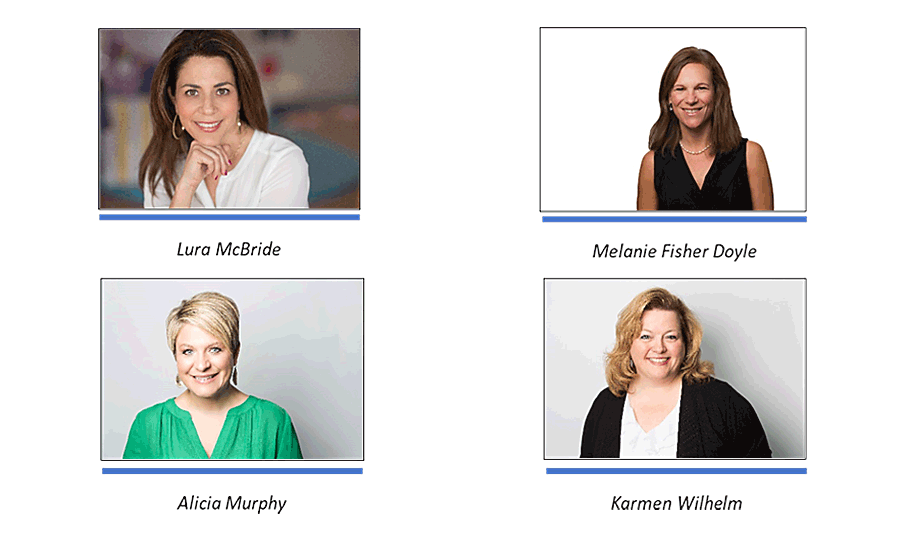 Women In Leadership: How Van Meter Inc. is Recognizing the Value in All Voices

In the industry space of electrical distribution, the senior leadership team at Van Meter Inc. is both unusual and refreshing: four of its seven top executives are women, including CEO Lura McBride – who rolled the dice on Van Meter 12 years ago after leaving behind a rewarding, 15-year career at a large consulting company. At the time, Van Meter was a small, entrepreneurial employee-owned electrical and automation distributor that she confesses she “knew nothing about.”

Turns out McBride knew more than she thought. She was promoted to Chief Operating Officer within two years of joining Van Meter, and, six years later, President and CEO. McBride was the only woman on the senior leadership team back then. Now she has six direct reports – three men and three women.

But McBride is quick to note that roughly 20 to 25 percent of the electrical industry’s workforce are women — and as a company, Van Meter fits into those metrics overall.

“The gender makeup of our leadership team may be unique to the industry, but I believe Van Meter is unique to the industry,” McBride says. “When people ask me, ‘What are you doing to promote women at your company?’ my answer is, ‘The same thing I’m doing to promote all people at our company.’ We appreciate the value of having diverse teams, because we’re stronger for it.”

It Starts with Culture

Van Meter, which has more than 800 employee-owners in 25 locations across seven states, is comfortable with being different. Its “people first” culture, attractive internship programs and generous benefits – such as paid paternity/maternity leave and unlimited time off policies — have long been recognized as successful business practices that helped grow the company and recruit high-caliber employees. McBride’s other three female executives all came to Van Meter from very different backgrounds: utilities, law, and production management, for example.

All of them say Van Meter’s commitment to hiring the right people for the right position (and ensuring they share the company’s core values) helped set them up for their current roles. And all four also give credit to past colleagues or bosses — mostly men, by the way — for getting them there.

“In my career, I’ve been fortunate to have some pretty strong male sponsors,” says Alicia Murphy, Chief Organizational Effectiveness Officer. “I say ‘sponsors’ because they’re different from mentors. A mentor is important, but a sponsor is someone who advocates for you and helps open the next door for you.”

Adds Chief Investment and Legal Officer Melanie Fisher Doyle: “Women don’t just need a mentor, they need a champion. Someone who’s willing to actually spend some of their political capital to help advance you, to help advocate for you. I’ve had a couple champions in my career, and they were men.”

It doesn’t hurt that Van Meter’s male executives have also pushed for a culture that not only recognizes the importance of work-life balance, but rewards it. McBride recalls a time, shortly after she started working at Van Meter, when then-CEO Barry Boyer checked in to see how things were going. McBride, who has four children, told him she found herself on the phone a lot after work, sometimes when she was pulling into the driveway as her kids were running out to greet her.

“I would give them the one-minute sign while I sat in the car on the phone, and then one minute would turn into five minutes and then the next thing I knew, I’d lost a magical moment as a mom,” McBride says.

So Boyer, who retired in 2012 after 20 years with the company, established Van Meter’s “5 to 7 Challenge,” where employees are supposed to refrain from calling or emailing between the hours of 5 p.m. and 7 a.m. each day. The practice has been in place — and respected — ever since. And while some might say such a policy is tailored toward working moms, the employee-owners of Van Meter say it’s just another example of a company culture that puts its people first.

“The 5 to 7 Challenge doesn’t mean I’m not working at 10 p.m., it just means I’m being proficient with my time but respecting my colleagues’ time too,” says Karmen Wilhelm, Chief Marketing Officer. “I truly believe being considerate of one another and embracing a model of personal accountability is what enables each of us to be our personal best at work and at home. There is no need for it to be one or the other.”

Change Is For Good

Looking back on their careers, McBride, Wilhelm, Murphy and Fisher Doyle share similar reflections: opportunities for women in business have grown, more hiring managers are recognizing the value of a diverse workforce, and the idea of “work-life balance” is widely regarded as a positive benefit for everyone (not just moms).

Similar to McBride’s story about waving off her kids to take work calls in the driveway, Wilhelm remembers being gone for conferences when her son was young and still needing to work late when she got home.

“I sat my son down one night in front of the TV with a Happy Meal from McDonald’s so I could finish up a project, and I thought, ‘I’m not doing any of this well,’” she says. “Coming to a place that gives you the support you need and the culture you need to have regular balance makes all the difference in the world.

Adds Murphy: “More companies are conscientious of work-life balance, for sure. Working was always my choice and it was not easy, but that was my path. I think companies have gotten better about understanding it, though. I’m just grateful that it’s a way of life at Van Meter.”

While the electrical distribution industry is lagging somewhat behind others in terms of the number of executive level positions held by women – only 12.5 percent according to an industry report released last year – McBride and her female colleagues attribute that largely to stubborn stereotypical gender roles. Wilhelm, for example, says she never played at being an electrician growing up, or “constructed things.” And she certainly didn’t aspire to work at a distribution company that sells electrical and automation solutions.

“How we were raised can definitely play a part in how we think and where we end up,” Wilhelm says. “But I see a lot of that changing, with school-based STEM curriculum, promotion of the trades, and so many opportunities that encourage young women to pursue their passion and try things once believed outside societal stereotypes. Working in this industry has brought more professional fulfillment to me than any other in my career, but I never would have dreamed of it back then.”

Fisher Doyle, an attorney who serves as Van Meter’s Chief Investment and Legal Officer, says many distribution companies employ people who have experience as an electrician – and yet less than three percent of the country’s electricians are women, according to Bureau of Labor statistics.

“Those are the drivers, it’s a simple as that,” Fisher Doyle says. “It’s not insidious. It’s just an outcome of the underlying factors.”

But as more women have advanced into leadership roles in the workforce, they’ve also gained more confidence and delivered more value to businesses – which hiring managers have noticed. In Murphy’s young career, for example, she recalls feeling as though she had to “fit in with the boys” when in fact she didn’t enjoy the mostly male-driven activities that she was invited to attend.

“It used to be, everybody would go golfing or out to drinks after work,” Murphy recalls. “I don’t enjoy golfing. I didn’t want to go hunting. I needed to get home, I couldn’t go to Happy Hour. But I used to think I had to act and communicate like a boy in order to be recognized and appreciated. That was something I had to learn; I’m better just being my authentic self. I’m better for me and my team and my company.”

McBride, who grew up with three brothers and happily played with Tonka trucks, says women used to feel like they needed to operate like men in business: confident and dominate. Thankfully, she says, that mindset has changed as more women have assumed leadership positions and delivered unique skill sets to the workforce.

“Mostly because of my upbringing, I think I had gender blinders on. Like why does it make a difference?” McBride recalls from her early career. “What’s changed though, is how much more we talk about authentic leadership and being yourself, your true self, and what a better leader that makes you.”

The Difference Is In Diversity

There’s no doubt that Van Meter’s core values run deep throughout the organization. The company is serious about putting the right people in the right roles – and making sure they are the right fit for its culture as a whole. McBride, who is focused on the vision, direction and growth strategy of the company, says recognizing the strengths, diverse backgrounds and unique talents of everyone is far more powerful than just hiring people who are similar to everyone else.

“I truly believe men and women are better together in business,” McBride says. “But I also believe – no, I know – that we’re stronger because we are really focused on all people regardless of gender, regardless of race, regardless of age... because our differences power innovation and problem solving. That’s a big part of why we’ve seen success.”

Fisher Doyle says Van Meter’s leadership philosophy naturally translates into a group of high-quality people who work together in a uniquely positive environment. She acknowledges that it helps that Van Meter is 100 percent employee-owned, because the common goal is to always do what’s best for the company – which in turn is best for them.

“But we’re not going around saying, ‘We need to get more women in here,’’ she says. “We’re just trying to get the best people, and that’s what Van Meter has always done so well.”

Adds Wilhelm: “We count on one another to be ‘all-in’ all the time, and to proudly bring our unique abilities and perspectives to work every day. Having a culture that recognizes all voices sets us apart as a great place to work, and positions us to continually create value in new and innovative ways for the people we serve.”